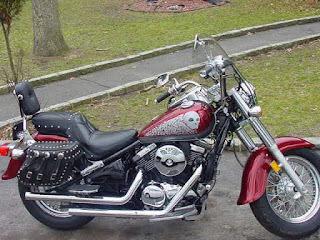 Back in 2001, I left my position with the NYC Board of Mis-Education as Assistant Principal of Special Education. I became an AP at the Harry B. Ward Tech Center with Eastern Suffolk BOCES. It was the best career move I've ever made.

When I left the city, they had to pay me almost two months of unused vacation time and over 100 sick days. Needless to say, it was quite a check.

I received my final check shortly after the beginning of September - a full six months after leaving. While deciding what to do with my new found wealth, the tragic events of 9/11 occured. 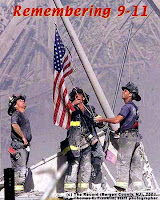 I lost a very good freind from high school that day- John Napolitano. He was a Lieutenant Rescue 2 who died that day along side too many of his brothers. John and I drifted appart after high school but I still considered him a great friend. 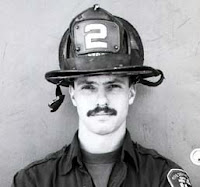 After mourning for all of those who died, something awoke inside of me. Something that was sleeping inside of me for twenty years. I wanted to ride a motorcycle. I didn't want to wait any longer. I guess I wanted to show that I want to LIVE my life again and do something daring.

John's passing made me remember my junior high school days. I used to ride a around on a minibike with another friend of mine. Sure, we were chased by the Police on a hunk of junk that barely went 20 MPH. But we were having a blast. We were free of responsibilitries and were having a blast.

In the Spring of 2002, I went out about a mid weight cruiser- a 98 Vulcan 800 Classic. The dealer had to deliver it because I didn't even know how to ride.

With an uglier than sin paint job, it was a great little bike to learn on. There was this skull coming out of a cloud. It was awful but it was mine. After taking a number of lessons, I finally passed my rode test.

After beating the hell out of this bike for the summer, I decided I couldn't take that paint job any longer. I had the kids in my Auto Body class repaint the tin and they did a great job. I used to get teased that I thought I was Jim Belushi in thay crappy movie The Principal.

These student wet sanded the old paint off and did a fantasic job of adding a silver swirl type flame. The bike looked totally different. I invested in several new farkels including new grips, fender tips, a Corbin Gunfighter and Lady Saddle, Kuryakn Iso Grips to name a few. Two years later, I sold this bad boy for my LT. 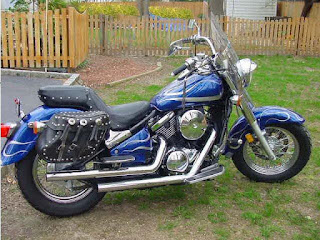