After years of preparation and anticipation for organizers and athletes alike, the 2008 Beijing Olympics drew to a close yesterday following a mesmerizing 14 days of competition.
Where the athletes have been pushed to the limits in their respective sports, broadcasters have faced a mammoth task, bringing the Games to an expectant worldwide television audience. Central to this effort have been people such as Gustavo Cuervo who, along with his colleagues and a fleet of BMW K 1100 LT machines, has helped provide television coverage of some of the most exhilarating sports at the Olympics. 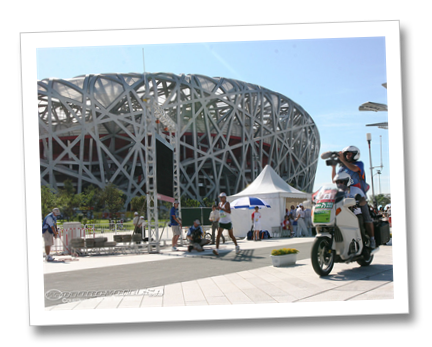 Gustavo is no stranger to motorcycle adventures. Since riding through Kenya, Tanzania and Niger aboard a BMW R 90 S over 25 years ago, he has enjoyed some staggering motorcycle expeditions that have taken him through 80 countries, spanning five continents. After completing his most recent ride - a 3700 mile (6,000-kilometer) tour of China aboard an F 800 GS - Gustavo arrived at the Olympics in Beijing ready to undertake an adventure of a different nature. He would be the person responsible for ensuring fans of road cycling, triathlon, marathon and walking would be able to witness the competition, by transporting cameramen aboard his K 1100 LT right into the middle of the action. In doing so, he has helped to provide the potential worldwide television audience of 3.5 billion people with a first-person perspective of these exciting sports disciplines.
"I've worked for Spanish television for around 25 years, usually riding motorcycles with cameramen sitting behind me covering the action," says Gustavo, a journalist in his native Spain. "I worked at the Olympics in Sydney in 2000, Athens in 2004 and now Beijing in 2008. I ride the motorcycles that are used for filming the marathon, triathlon, and cycling events - 11 events in total. In Beijing I have been part of a team including Chinese, Belgian, French and Spanish people, and we all work together to provide the television footage that will be broadcast worldwide.

It's a fantastic experience, but it's very hard work. On days where there is a race to cover, I normally work for around 12 hours, but even on the days off, we test the equipment and do practice runs."
Gustavo admits that the riding involved can be very demanding. Laden with a cameraman, plus the wires and technology required to transmit live pictures, the K 1100 LT has to cope with a total weight of up to 500 KG. And when covering events such as 'racewalking', speeds rarely exceed seven mph (11 km/h), meaning bike control is paramount. However, Gustavo reveals that the K 1100 LT is a capable machine, even at low speeds.
"Although the BMW K 1100 LT is not the newest model, it is one of the most suited to the task in hand. Because the events that I cover each differ in the style of riding that is needed, you need a very versatile bike that is comfortable at low and high speeds and that can carry heavy weights as well. 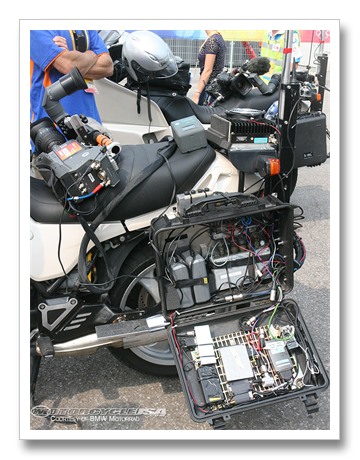 "There aren't too many modifications to the bike, apart from all the cables that are needed to transmit the pictures! The main thing to remember is that the bike is much heavier than standard because of all the equipment, so to avoid the unlikely problem of overheating, a second fan has been installed," he adds.

With a strong background in covering road cycling, Gustavo has a special place in his heart for the sport. "My normal day-to-day job is managing a team of motorcycles for the cycling Tour of Spain," he says. "I've also ridden for the Tour de France and Giro d'Italia. Cycling is the most interesting sport to cover as the speed that the guys achieve on two wheels, without an engine, is amazing! The challenge is to position the motorcycle in the areas where the action is and capture the essence of the sport, without getting in the way of any of the competitors."

Away from the blood, sweat and tears of Olympic competition, Gustavo believes that China - still an enigma to the majority of the western world - offers some fantastic motorcycling opportunities. "People who visit China tend to stay around the east coast, visiting places like Beijing and Shanghai," he says. "Very few people consider broadening their horizons and getting off the beaten track and because the country is so vast, there are so many surprises to be seen. The Gobi desert for example is simply breathtaking. There is some fantastic motorcycling to be enjoyed." 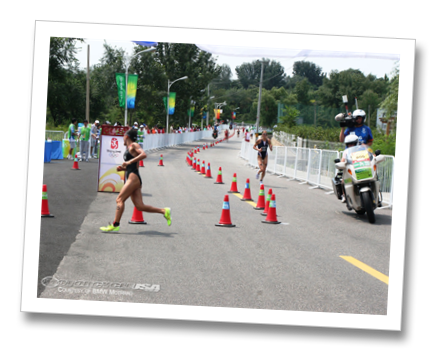 But for two weeks in August, Beijing has been at the subject of the world's glare. Almost 11,000 athletes have competed for 302 gold medals, with over 20,000 members of the media poised to capture every second of action. The Games have once again brought the world closer together, and for the first time in recent memory China has opened its doors and staged an event on an epic scale. Gustavo, a veteran of three Olympiads, believes the Chinese people have done a remarkable job. "The overall feeling in Beijing is happiness. The Chinese people are delighted to have the Olympics in their country and are very welcoming. Having been to every Olympics since Barcelona in 1992 I can honestly say that I think that Beijing 2008 has been the best Olympic Games that I've had the pleasure of experiencing."