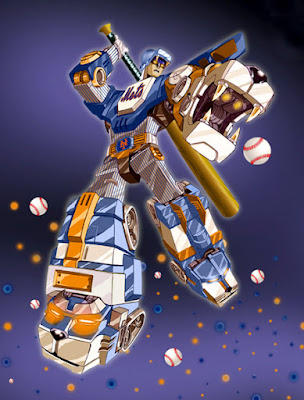 NEW YORK—Facing the Cubs in the midst of a three-game losing streak, the desperate Mets sprinted out to the field Tuesday, launched themselves high into the air above Shea Stadium, and combined their bodies to form a 400-foot tall fielding robot called Carlos Voltron.

According to eyewitnesses, before the Mets players completed the complicated procedure, in which they fused their physical selves and combined their talents to form the 20,000-ton robot, manager Jerry Manuel called the team to the dugout, where he commanded them to prepare their interlock systems for activation, connect the appropriate dyna-therms, charge up the infra-cells to full capacity, engage the mega-thrusters, and give it their best out there.

"After losing eight of our last 12 games, forming Carlos Voltron is our only hope to save our playoff chances," Manuel said. "We really need power this late in the season, and the 2.5 million pounds of thrust in Voltron's solid-fuel boosters should give us the lift we need."

Leaving behind blue and orange vapor trails as they soared across the sky, the Mets were reportedly surrounded by a crackling electrical field as they folded their limbs into their bodies to ready themselves for assembly and to protect the team's home record.

Although Manuel said he had to settle an argument over who got to be the robot's head, his final lineup was David Wright and José Reyes forming the legs, Ramón Castro and Ryan Church making the feet, Nick Evans and Johan Santana completing the arms, Carlos Delgado and Luis Castillo joining to create the torso, and Carlos Beltrán forming the head.

While Cubs batters had taken early advantage of the Mets pitchers on Monday, the towering spectacle of Carlos Voltron proved to be an imposing presence on the mound, as the force of his foot slamming into the ground after the windup of his first pitch knocked the batter and umpire into the third row of the stands. In addition, the seismic energy unleashed by Carlos Voltron's follow-through created several deep cracks in the foundation of Shea Stadium, and accompanying atmospheric disturbances caused a 747 in a holding pattern over nearby La Guardia airport to plunge from the sky.

"In the second inning I had to have him take some heat off those pitches or he was going to kill somebody," said Manuel, adding that he clocked the first pitch at 85,000 mph. "After what happened to poor Alfonso Soriano, I told him let them hit a few balls."

"We might face this team in the playoffs," continued Manuel. "I'd hate to see what would happen to us if the Cubs unleashed the Robeast from their bullpen."

With his fast first step and an exceptionally long stride that carries the giant robot from the mound to the center field wall in one step, Carlos Voltron put on an amazing fielding display in the fifth inning when he robbed Cubs third baseman Aramis Ramírez of a 500-foot shot by plucking it out of the air between the robotic index finger and thumb of his leonine hand.

Although the Mets' fielding skills were excellent, they were not without flaws. Cubs manager Lou Piniella came out to the field to protest several times, complaining that his base runners injured themselves in the 10-foot deep trenches left behind from Carlos Voltron scooping up ground balls. Piniella also expressed frustration over his players suffering from collapsed rib cages, ruptured organs, and decapitations every time Voltron tagged them out.

Carlos Voltron's solid and consistent defensive play was only upstaged in the fans' eyes by his powerful hitting, with those in attendance claiming they suffered bad sunburns from the glare caused by the robot forming his blazing bat. Stepping up to the plate, he made almost perfect contact with the first pitch, belting the ball out of Shea and into the next solar system.

"That big guy they have at the heart of their lineup really has potential," Piniella said. "Little stiff, needs to fix that stance some, and could probably use some work on the throwing mechanics, but really, you get the feeling he's going to be good."

"I wonder how long they have him signed for," added Piniella. "Might be a risk with him shutting down for 20 minutes after getting gravel from the warning track in his guidance apparatus. Ah, what am I thinking? We already have Kerry Wood. We don't need another robot."

Meanwhile, defending a comfortable 600-0 lead in the top of ninth, the Mets decided to rest up Carlos Voltron by moving him to the outfield and replacing him with reliever Aaron Heilman, who lost the lead and eventually the game after giving up 618 runs to close the inning.
Posted by Rob VB at 1:00 PM