The other day, having nothing to do, I was on the BMWLT.Com website and a friend of mine named Messy13 was discussing getting a Tiger 1050 for his next bike. I decided to check it out and now, I can't stop thinking that this might be my next ride too!

Keeping a Tiger in Captivity 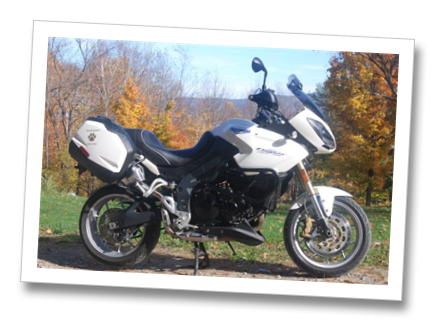 The Tiger has come a long way over the last 14 years. Tracing its heritage back to 1993 when Triumph was still using modular frames and carbureted engines, it became fuel injected in 1999 and hasn't looked back. 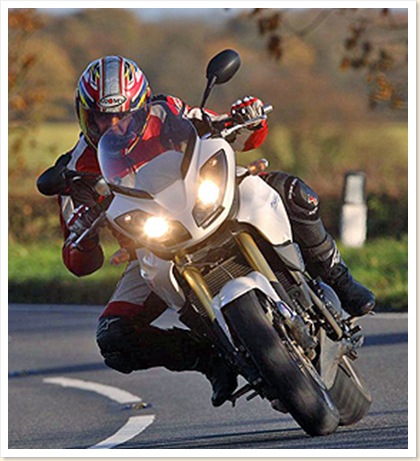 Styled to look like the Paris/Dakar off-road racing bikes of the '80s, with the large gas tank and aggressive twin-headlight front fairing, it was a very enjoyable and well-rounded machine. I was lucky enough to make a 3,600-mile tour out west in 2000 on this second version and was taken by the silky-smooth power delivery, light steering, and simple, robust nature of the bike.
By 2002 the engine had been enlarged to 955cc, which gave the bike an additional 20 horsepower over the claimed 86 produced by the 885cc model. Photographing and documenting the Triumph Across America ride, I was continually stopping to take pictures of the riders before manically attempting to catch back up to the group. It seemed the bike spent most of the 3,200 miles on or near redline, and I have never thrashed a bike so hard for so long. On one of the days along Highway 60, the loneliest road in the world, I covered 104 miles in 63 minutes blasting along the deserted two-lane playing catch up. This involved many climbs, descents and corners, and temperatures in the 100s. Thankfully, the Tiger never missed a beat and became a well-trusted friend during the journey. 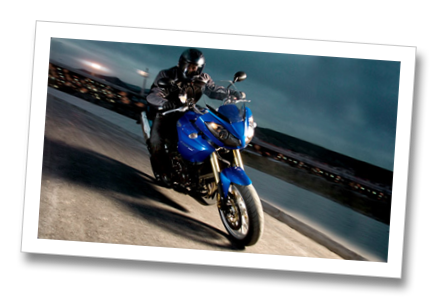 Then in mid-2004, Triumph brought me a long-term test unit to try. No documentaries or transcontinental trips to crow about during that test, but the '05 and I covered more than 2,500 very happy miles together: A 1,000-mile trip to Virginia, some evenings out around town, and plenty of short, fun rides with my son around the Smoky Mountains gave me ample opportunity to put it through its paces.

With a conflicting travel schedule excluding me from the World press launch in Spain for the newest Tiger, I lucked out when Triumph brought me a squeaky clean new one a few weeks back. I am at this point a little sad to say the North Carolina winter weather has not been too cooperative with my schedule for any marathon journeys. But, from the short-hop journeys around the city, mad blasts into the local countryside, and two-up trips to the coffee shop I have performed, the '07 Tiger is a quantum leap forward in the development and progress of the beast. Sure it has lost some of its off-road styling, but get it out on a twisty back road, let the 1050cc Triple catch its breath, and there are few more fun ways to spend a day in the saddle of a motorcycle.
Visually, the new Tiger is sharper, more street-focused and fits right in with the rest of the Triumph range with its distinctive angular look. Long-term Triumph buffs will be able to trace the frame back to the original T595 Daytona that was introduced in 1997, and while there are number of shared parts with the new Speed Triple and Sprint ST, the bodywork is all-new. Quoting 5.2 gallons as the fuel capacity, I could only get 4.2 gallons in the tank both times I ran the bike at least 15 miles with the reserve light on. This means either the factory literature or the fuel light are telling porky pies (lies in English), and if the brochure is to be believed then the bike can cover around 50 miles or more after the fuel light comes on. I averaged somewhere around 40 mpg. A full tank should give at least 160 miles while touring.

While I didn't get to do any real long distance rides, I did put a few Interstate hours in to get a feel for the Tiger's abilities in this department and returned from my rides a tad conflicted. The seat is great; the ergonomics perfect, if you like the standard sit up straight riding position, but the windshield was either too low or too high for me. I have a 30-inch inseam, and am about six-foot tall. This put my head fully in the breeze and made it subject to a fair amount of buffeting. If I sat up as tall as I could, my helmet entered a much calmer air flow, but for me, this became tiring as I slouched down a little and into the rougher air flow. It does do a good job of keeping your upper body out of the breeze, and on one sub 40-degree ride I was very happy for the coverage it gave me. Personally, I could do with the shield being either taller or shorter.

While on these Interstate missions, the Tiger tended to be running between 4,000-5,000 rpm, which is the motor's sweet spot. Translating to speeds of 65-80 mph, there is no need to go cog swapping if you want to overtake. Between these two rpm points, the engine is willing and able to accelerate strongly with a light tug on the throttle cables. Running the Tiger up hard through the gears doesn't produce a noticeable spike in power anywhere, with more of a steady building process as it approaches redline.

Bayly said the seat and ergonimics of the Tiger are great for a standard sit-up-straight riding position but wished the windshield was either taller or shorter.

As the same basic unit found in the Speed Triple and the Sprint ST, in Tiger guise the inline 1050cc Triple produces a claimed 114 horsepower at 9,400 rpm, and 74 lb-ft of torque at 6,250 rpm. This is down some 17 horsepower from the very lively Speed Triple, but the nearly identical torque figures happen lower down the tachometer on the Tiger. (This should translate into rear-wheel hp numbers in the mid 90s. -Ed) In real-world terms, the Tiger is still a very fast bike, able to get off the line on a whiff of throttle ahead of our four-wheel friends, and it will crack the 100-mph mark without breaking a sweat. 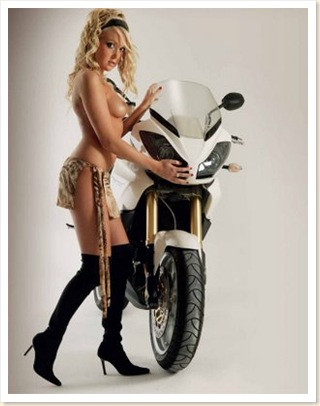 From the rider's seat, you hear a lot more engine noise coming up through the fairing openings than on the naked Speed Triple and barely any sound from the large high exit muffler. I have already seen aftermarket pipes for the Tiger, and it would be nice to let the beast roar a little, as it sounds like it is trying to shout with a sore throat as standard. Checking out the inside of the cockpit area and gauges from the hot seat reveals a very clean, minimalist layout. The instrument cluster is similar to Speed Triple without the shift lights on the side of the tachometer, and this is still an analog unit, with a small central digital speedometer. All the in-flight readings are on the digital display board to the left of this, and there are buttons below to set one of two trip counters.
There are no heated handlebar grips, GPS systems or radios on board the fairly minimalist Tiger, and the switchgear is still late '90s vintage. The brake lever is multi-adjustable, although the clutch is not, and the turn signals are not self-canceling. Mirrors are okay, and while they are not too blurry at speed, they show too much elbow for my liking. Not uncommon, and as far as motorcycle development has come, no one has been able to remove the arms from the rear-view picture.

The DOHC three-cylinder engine in the Tiger is slightly detuned from the same basic unit that's found in the Speed Triple streetfighter, which works really well in this application.

With the Tiger moving toward the sport end of the motorcycle spectrum this year, it was no surprise to find it rolls on a 180/55-17 tire out back, and a 120/70-17 in the front, typical contemporary sporting fare. Wrapping around an attractive pair of cast-aluminum spoked wheels, they are ready to rock when the road gets twisty. They are well complemented by the suspension, and up front there is a set of 43mm inverted units, with a traditional single shock in the rear. Both units are fully adjustable, and as delivered my only adjustment was some more compression in the front to eliminate some of the dive under hard braking. Around town, and for the majority of the time, this wasn't necessary, as the package is comfortable and compliant, without getting bent out of shape if you hit any major road imperfections. I actually made a point of noting how quickly the rear recovers from big bumps, without the ripple effect that sometimes happens with stock suspension units.
Getting the bike back to legal speeds after experimenting with the gear ratios, a set of radial-mount brakes enjoy a long-term relationship with a pair of 320mm floating rotors. Each containing four pistons, they are plenty strong enough to lift the rear wheel when you are trying to impress the sportbike boys. In their hurry to get me the bike, I think some of the delivery grease made its way onto the rotors, as I needed a strong hand to get the best from the set up. Having ridden the ST and the Speed III on essentially the same set up, this was a pad issue not a brake system complaint.

Under the right foot, there was a fair amount of travel before any action started from the two brake pistons in the back, and this ensured no unwanted-lock ups from an overenthusiastic push. If I were keeping the bike, I would be bleeding the system and raising the lever a bit. Again, these are minor complaints that will be addressed before new owners take delivery of their machines.
For zipping around town, even though the Tiger still sits plenty tall, the new machine is a hoot. The steering lock is more forgiving for tight, low-speed turns than a naked standard, and the upright riding position gives great visibility in traffic. Curbs and parking lot markers are just an excuse to try out the bike's ground clearance, and the new aggressive look and explosive paint color inspired some great conversations at my local coffee shop.
But the most fun to be had on the Tiger is heading out into the country with a full tank of gas and no particular destination in mind. Able to handle just about any type of road you can find on the map, the new Triumph Tiger 1050 can easily deal with living in captivity. It is just happier when it is out prowling around in the wildest countryside you can find. 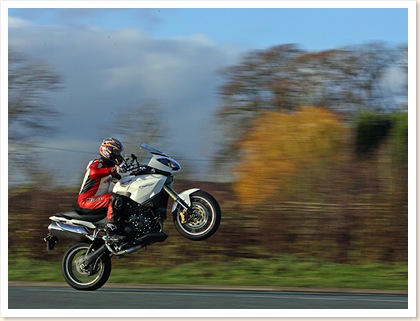 Tomorrow is Election Day. I may have to go test ride this Tiger!