Went to the motorcycle show as a chaperon with the Marine and Motorcycle kids. Man, I love my job!

Here how I summarized the trip the Beemer guys:

Today was a great day to go to the bike show! The snow kept the crowds down!

BMW was there in full force with a bunch of bikes. John Z. pointed out to me that even the Pres. of BMW Motorcycles was there. He was chatting up the new GTL. I was able to listen to him talking about the new Luxury Tank. For a paper pusher, he knew his stuff! The GTL was a great looking bike but some of the plastic, no electronic center stand and the lack of a reverse makes me nervous. The electronics on the Nav, audio and control systems was very impressive. Did not care for the two small pockets in the dash that could barley hold a pair of gloves or an Ipod. Plus, the fact that they still have not stated a price for this bike is extremely annoying. " Similar to a Gold Wing!" Talk at the show and the message boards- 25-28K. PASS!

I made my annual donations to both Backroads magazine and BMWMOA. I signed up for a 3 year subscription to Roadrunner and got a cool calendar to boot! I bought a Nolan N-90 and a Gerbings set up. Please don't tell the wife!

Far fewer booths this year. This made everything spreadout making a much more enjoyable event for me. 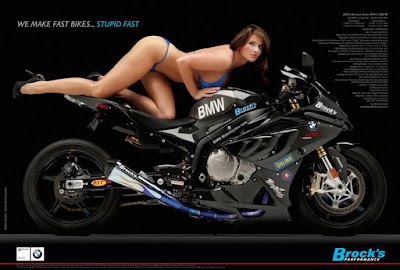 Surprise of the Show- seeing John and Charlene manning the the Graham County NC booth. They are the owners of the Ironhorse Ranch and they remembered me by name. Again, great people! Can't wait to see them again in April.
Best Sales Pitch- Ural Guys!
Best display- Handmade Wooden Canoe guys upstairs by the Boat Show.

If I didn't have to work again tomorrow morning, I would definitely head back in for another day.